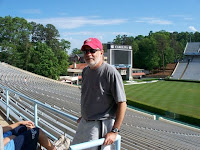 My dad's never been super-fanatical with pro sports. He watches all his favorite teams' games, but if he doesn't have a rooting interest, he's OK with doing chores instead.

But when it comes to his sons' games, that's another story. And today, on his 37th wedding anniversary (and the day after his 1st ever Senior Citizen Discount -- a dollar off his ticket to Up in the Air), I want to take the time to remember some of his top moments.

3) October, 2003: Imagine being a benchwarming freshman on the Penn Sprint Football team, traveling over six hours to play Cornell in the freezing Ithaca rain in front of maybe 10 fans, and then finding out your dad is one of them? "Wow, thanks for coming," Greg said after the game. "You really are insane."

2) December, 1995: My dad went to every single one of my freshman basketball games. I don't think the other parents even knew the schedule. "Dad," I remember pleading. "You can't come to all my games. It's embarrassing." So he'd wait until the game started (once I was distracted), and sneak into the bleachers.

1) September 2008: But when Dad started showing up to his PepsiCo beer league softball games, Greg knew he had the winner. "We can't even get the players to show up," he'd say. Even Dad admitted he felt a bit strange watching voyeur-like from beyond the outfield.

But if Greg ended up getting the game-winning hit with two outs in the last inning, he wasn't about to miss it.

NFL Week 17 Picks
I have a theory about Week 17: Teams playing with nothing to lose fare well against teams with everything to lose. These are the games that meet my criteria:

For boyfriends, watching the bowls used to be simple: There were just the right number of games, and they were all on New Year's Day -- the day the whole country lays in bed with a headache. There were no expectations from girlfriends. Just wall-to-wall, uninterrupted football.

But inevitably, college football got greedy. And greedier and greedier. Not only did they add games to the mix (from 8 in the '60s to 15 in the '80s to a whopping 34 today), they spaced them out over what's now a three-week bonanza, beginning last Saturday with Wyoming's overtime upset in the New Mexico Bowl.

So for boyfriends today, the challenge is greater than ever. The stretched-out bowl season is littered with holiday parties, family gatherings, and dinners we allegedly promised to go to. It's too much to keep track of. We have to go in with a plan.

1) The Champs Sports Bowl (Miami vs. Wisconsin, Dec 29, 8:00 ET)
I don't know if you saw ESPN's (fantastic) documentary, 'The U', or not, but I know Miami's players did. And when those impressionable young men see the way their predecessors took college football by storm with their dominant play and excessive celebration, they're gonna be inspired...and we'll be in for a show. FVG Pick: Miami -3

2) The Sun Bowl (Oklahoma vs. Stanford, Dec 31, 2:00 ET)
Lindsey's team vs. "Great White Hope" Gerhart. I get a free pass on this one, but even if I didn't, this'll still be a fun one to watch before before New Year's Eve hoopla commences. FVG Pick: Oklahoma -8

4) The Rose Bowl (Ohio State vs. Oregon, Jan 1, 4:30 ET)
Enjoy this better-than-usual (and finally USC-less) Granddaddy of Them All as you continue to nurse your granddaddy of a hangover. FVG Pick: Oregon -3.5

5) The Sugar Bowl (Cincinnati vs. Florida, Jan 1, 8:00 ET)
I've never seen a team more outwardly pissed off at their coach than the Bearcats when Brian Kelly left for Notre Dame. They seem way more motivated than the teary-eyed, heartbroken Gators, who have no famous Tim Tebow speech to inspire them this time. FVG Pick: Cincinnati +11.5

6) The Papa Johns Bowl (South Carolina vs. Connecticut, Jan 2, 2:00 ET)
Not to be confused with the Little Caesars Bowl, this pizza interests me for personal reasons: I want to love UConn football like I love UConn basketball. If Randy Edsall commits to the school the way Jim Calhoun did, I think it can happen. FVG Pick: UConn +4.5

7) The Fiesta Bowl (Boise State vs. TCU, Jan 4, 8:00 ET)
I'm actually not that interested in this one, even though I know I'm supposed to be. I just don't get why they would put these two teams against each other when the whole idea is to see how they'd fare against BCS-conference teams. Maybe we'll have a dinner party that night. FVG Pick: Boise State +7

I want to tell you in advance of an opportunity to sweep your girlfriend off her feet, and whisk her away for a weekend of fun and romance.

And not miss a second of football.

There's an upcoming weekend -- Jan 30-31 -- that falls beautifully between the conference championship games and the Super Bowl. So even though it's right at the NFL season's climax, there's actually no football to miss.
(I know, this year they're doing the Pro Bowl that weekend. But the Pro Bowl's only real purpose is to make you wish you were in Hawaii. And it's not even in Hawaii this year. So now it has no purpose.)

And don't worry about your cover getting blown: It would never occur to her you were crazy (or smart) enough to think that far ahead about the NFL schedule. She'll just tell her friends what a thoughtful, romantic, handsome boyfriend she has.

So be 'spontaneous'. Last year I surprised Lindsey with a trip to Charleston. We had the best time. We still talk about it. And every time we do, I earn points.

This year we all got into the act: Chad, Devin, Frank, Ramsey, and I are taking our girlfriends to Vermont. We're gonna ski, eat, drink, relax, make snowmen, sit by the fire, listen to music, play board games, and whatever else we feel like doing. And not even once will we consider watching football.

Aren't we just the sweetest?


Weekend Picks
Dallas (+7.5) @ New Orleans (Sat 8:20 ET). Maybe playing away from their angry mob of fans will do the 'Boys some good. Saints are 1-5 ATS in their last six against the NFC.

Kansas City (-1) vs. Cleveland (Sun 1:00 ET). A bad team coming off a good win with a few extra days to celebrate? Cleveland's gonna lay an egg here, big time.
Miami (+4) @ Tennessee (Sun 1:00 ET). I understand why Miami's not favored, but this team kicks it into another gear down the stretch. It's awesome.

Usually when you tell someone what NFL team you root for, they follow up with something like, "Good year for you guys", or "What are you gonna do about your QB situation?" These are expected and appreciated, because they imply that the questioner approves of your choice of team, and trusts you're a good fan.

But when I tell people I root for the Miami Dolphins, I don't get follow-ups like "Nice win last week" or "Can you believe how Ricky's running?"

I get, "Why the heck do you like the Dolphins?"

And I never have a good answer. In fact, most of the time I don't even have an answer. I just get aggravated and bark something like, "I don't know, I just do."

Most fans don't realize how good they have it. All they have to worry about are wins and losses. For me, Dolphins' losses are just a part of it.

I have to justify my entire reason for being. 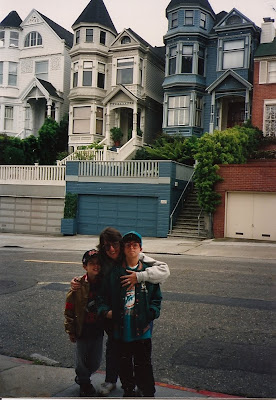 So why am I a Dolphins fan? After years of getting defensive and dismissing the question, I realized I honestly didn't know the answer. So I sat in my room and did some soul-searching.

Here's what I came up with:

It started with my dad. Like most kids, I rooted for who my dad rooted for. But my dad didn't have a favorite NFL team, so I decided the next logical choice was my grandparents. My mom's mom lived in Philadephia, and my dad's parents lived in Fort Lauderdale. It was the Eagles or the Dolphins.

This was where it got a little fuzzy, but in the end, I'm pretty sure it came down to an NFL mail-order catalog, and deciding what color jacket I wanted for my 8th birthday.

The picture says it all. Wow.
So from now on, I'd like to ask anyone wondering why I like the Dolphins to please refer to this post. Because while it's certainly not the best reason for liking a team, it's my reason. And it's just gonna have to do.

Baltimore (-13) vs. Detroit (1:00 ET). I like Baltimore taking their frustrations out on Detroit here. They're 9-0 ATS this year against teams with a losing record.
Miami (+3) @ Jacksonville (1:00 ET). Not much of a home-field advantage here. Governor Charlie Crist is pleading for Jax to draft Tim Tebow so more people will come to their games. Never a good sign.
Oakland (+1) vs. Washington (4:05 ET). Washington's played a lot better the past few weeks, but so has Oakland. I don't see how the home team is getting points here.
Arizona (-3.5) @ San Francisco (Monday Night, 8:30 ET). Arizona's 5-1 ATS on the road this year, so forget about the Painted Ladies in that silly picture, and jump on the gravy train.
Last Week: 2-1
Record to Date: 27-31-3
Posted by Matt at 1:46 PM

Two years ago, Chad sat me down in the living room to have a heart-to-heart. After six years of living together -- through college, Boston, and two places in New York -- he was leaving me, to move in with his girlfriend. A few months later, he packed up and left 7M.

A year later, it was my other roommate, Devin. He really enjoyed living with me and Ramsey (who took Chad's place), he said, but it was time for him to move in with his girlfriend. He went two floors down, to 5H.

Our building had become The Dorm.

Ever since we finished college -- when we scoured the city of Boston for a six-person apartment -- my friends and I have had a tough time leaving each other. So when the time inevitably came to move in with our girlfriends, it only made sense we'd figure out a way to soften the blow.

Our friends' relationships are thriving. Ramsey and I watch just as many games with them as we used to. The girlfriends love the alone time. And Devin -- who's known to sleepwalk and lock himself out --  now has a three times better chance of not ending up in the hallway.

Oh, and no one paid a broker's fee.

My generation takes advantage of hindsight. We've watched half our parents' marriages end in divorce, and we get married later than they did because of it. Not surprisingly, divorce is down. We understand the advantages of easing into things. Perhaps this is our latest innovation: A way to move in...without moving out.

Tonight we're throwing an Around the World party, with a different drink in each of our rooms. Yep, just like in college. For being a loyal reader of my blog, you're more than welcome to come.

The Dorm definitely felt weird at first. But clearly, we've embraced it.

And when Judgment Day comes for you and your friends, I recommend you consider doing the same.

Cincinnati (-2) @ Pittsburgh (12:00 ET). Cincy wasn't even supposed to be good this year, let alone undefeated and BCS bound. Enjoy Brian Kelly, Bearcat fans. He won't be around much longer.

Alabama-Cincinnati BCS title game, anyone? Hmmm, doesn't quite have the same ring to it.