Lindsey was never under the illusion that just because football was ending meant I'd start going leaner on sports.  Sports-watching doesn’t dissipate, it adapts. 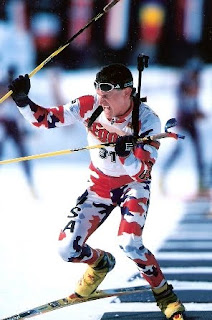 I just think she figured she'd be competing with college basketball, not mass-start biathlon.
I've always liked the Winter Olympics better than its warm-weathered counterpart, but it's never been like this. With the notable exceptions of human-interest stories and figure skating (unfortunately, Lindsey’s two favorites), I can honestly say I've enjoyed watching every second of this year's Olympic coverage.  And the more obscure the event, the more I like it.
Everyone loves the downhill skiing, but what about the cross-country skiing?  Everyone loves the hockey, but what about the curling, short track speed skating, large hill ski jumping, and 10km nordic combined?  They’re completely random, and no one in our country cares.
But I think that's why I like them.  Because even though we might not care, somewhere in the world there are people who do.  Somewhere in the world, this is the Super Bowl.  And these events take us to those faraway places.
I picture a small town in Finland, a curling stone’s throw from the Arctic Circle.  I picture the townspeople arriving home from work on a frigid Friday, starting a fire, and pouring themselves a glass of Glögi.  And somewhere in that town, I picture a girlfriend, desperately trying to convince her boyfriend to take her out to dinner.
“You know I love you, honey,” I picture him saying.
“But Nordic Combined’s on tonight.”
Posted by Matt at 2:23 PM

A Fan is Born 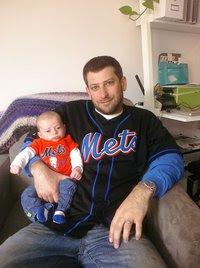 I'd normally take a moment to wonder what Asher's childhood might be like.  But in this case, it isn't necessary.  I already know.

Long before the two of them got married, I remember us all going to Mets games together.  On the way to the stadium, Scott would 'test' Orit on the Mets lineup and positions in the field.  It wasn't enough for her to know Beltran, Wright, and Reyes, however.  She had to know everyone.  "We've been over this, honey!  Jose Valentin hits 8th!"

In January 2007, when Scott first called me to tell me he was getting married, I caught an unmistakable twinge of guilt in his voice.  "The date's October 26th," he said.  "And I'm not happy about it.

"The Giants play the Dolphins that day....and it's Game 4 of the Mets' World Series -- assuming we make it."  My mind started racing, thinking about the ways we'd check scores.  "I know," he said. "I don't know what to do."

At the hospital, the night after Asher was born, Orit woke from a nap to find Scott holding the baby with one arm, and checking espn.com on his phone with the other.  "I was telling him about the Mavs-Wizards trade," he said.  "I can't believe they got Caron Butler!"

On Monday, I went to visit baby Asher.  The new parents and I sat and talked for a while, and I even got to hold him for a bit.  It was an incredible -- and totally surreal -- experience.  It's one thing when your friends start getting married, but when they have kids?  That's when you know you're a grown-up.

I thought of the pictures of my parents' friends holding me when I was a few days old.  That was me now!  I imagined us all sitting around the dinner table twenty or thirty years from now, and telling Asher how far he's come, and how 'I remember holding him when he was just a three-day-old baby'.  Just the way my parents' friends do when they see me.  Then Scott hit me on the shoulder.

It's Gotta Be the Shoes 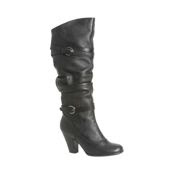 Knowing tomorrow was Super Sunday -- and that Lindsey would devote her entire day to me, my friends, and football -- I spent last Saturday shoe- shopping with her and Maria.

Most of our shoe-shopping experiences are essentially the same.  We walk in, Lindsey disappears, assistants ask me if I need help, quickly realize I'm a lost cause, I make my way to the guys' section, pick out a pair I could maybe see myself wearing but not really, Lindsey sees me and tells me 'don't even think about it' -- which is fine because I wouldn't have anyway -- and I take a seat to watch her do her thing.

And believe it or not, this makes me happy -- because I look at her face, and she's just beaming. Nothing on our beautiful earth brings her more joy than shoes.  She floats from aisle to aisle, boot to boot, holding up pair after pair that look exactly the same, chooses one, and then asks my opinion. "They look great, babe," I say, because there's no reason not to.  She's gonna get 'em anyway.

Another reason shoe-shopping doesn't bother me (even though I know I always complain about it)?  I totally get it.  I know what it's like.

Eighteen years ago this weekend, the eight highest-flying basketball players in the world gathered in Charlotte for the 1991 Slam Dunk Contest. 'The Rain Man', Shawn Kemp, was the favorite, but little-known Celtics' rookie Dee Brown ended up stealing the show.  Right before his championship-clinching dunk, Brown bent down to give the little inflatable basketballs on his black Reebok Pumps a few memorable squeezes. Then he darted toward the hoop, soared into the air, covered his eyes, and thundered home the "blindfold" dunk we all still talk about today.

And then I immediately sprinted -- possibly faster than Brown did -- up to my parents' room.

ANNIE (girlfriend of Ramsey): "This was my first football season with Ramsey.  I didn't know what to expect.  I think it was worse than I prepared for!"

MORGAN (fiancé of Chad): "I remember when I thought it was so cute how Chad and all his friends played this fantasy football game together.  How nice!  What great bonding time!  It went downhill quickly."

LINDSEY (my girlfriend): "Football is always on.  If it's not a game, it's a report about the last game.  Or the next game.  It's always something."

MORGAN: "I have this vision of Chad sitting on the couch in his underwear at 7:30 on a Wednesday morning with his laptop -- something about trades needing to be in by 9.  I won't miss that."

ANNIE: "Another time I went to the bar with him for eight hours to watch the Steelers play the Bears.  We had to show up at noon for a 4:00 game, because we had to "get a good seat".  I won't make that mistake again."

LINDSEY: "The obsessive score checking.  If you tear your boyfriend away for some very important event -- a life event, or a major disaster (because those are the only things that would be worth your boyfriend missing the game for), he obsessively checks scores the entire time."

ORIT (wife of Scott, and 9 months pregnant with their first child): "Football season -- and the Giants in particular -- bring Scott so much joy, and I'm supportive of anything that makes him happy.  But my due date is very close to the Super Bowl this year, and if the Giants were still in it, I think he might stay home and watch the game."  (It would be on at the hospital, Scott assured her.)

ALLI (wife of Jason): "I love football as much as anyone, but it's too aggressive sometimes.  Why do they always have to zoom in on the loser?  Hasn't he suffered enough?"

KARA (wife of Karl): "My husband's allowed to watch all the football he wants, as long as he irons while he does it.  Does this mean I have to start ironing again?"

MICHELLE (girlfriend of Devin): "I'm excited!  I get to watch The Bachelor on the big TV instead of the little TV on Mondays."

CARLY (girlfriend of Frank): "I'm excited Sundays are now viable alternatives for Frank and I to do things together."

KRISTEN (girlfriend of James): "I'm looking forward to the Super Bowl!  I couldn't tell you who was in it the last five years, but I can tell you who won our office pool and which bar we went to!"

MICHELLE: "He usually just stumbles in, eats a lot, and goes to bed."

BECCA (wife of Steven): "What am I most happy about?  I'm most happy FANTASY football is almost over!"

(Apparently Becca hated it so much she didn't realize fantasy football is over, and has been for quite some time.  Though some would beg to differ...)

MORGAN: "This is a bit of a trick question, because we all know fantasy football NEVER ENDS.  I witnessed my first fantasy 'practice draft' this summer.  Eight boys of all ages shouting out names of people I've never heard of, without missing a beat."

LINDSEY: "It's grown men debating heatedly about players as if they're friends with them.  It's mock drafts (the correct term, well done Linds) that have no purpose and no end.  It's the reality that you have no idea who everyone's talking about and you just want them to stop for five minutes, but they never do."

MORGAN: "It was clear these boys had been doing this with each other -- and possibly alone in their rooms -- for quite some time."

LINDSEY: "I'm not exaggerating.  If I try to change the subject, Matt's brother Robby literally interrupts and says, "Wait, why aren't we talking about fantasy?"

BECCA: "There's definitely things I'll miss, though.  I might not know all the fancy plays and rules, but there's nothing better than tailgating, playing flip cup, cheering on your team, and watching cute boys in tight pants running around the field."

ALLI: "I don't think I'm the only girl that will say Football Sundays are my favorite time to "cook".  Chips, salsa, cheese balls, little weiners all wrapped up in blankets.  It's beautiful."

LINDSEY: "Even the smallest amount of interest from you in any of the games, any of the teams, or any of the players, makes your boyfriend beyond happy.  I like that part of it.

ALLI: "I'm excited to see the Chiefs turn it around next year.  They had a terrible season, but I think they're ready to turn the page."

MORGAN: "Chad and I are spending three weeks after our wedding traveling between Fiji, New Zealand, and Australia.  During this time, I'll experience some of the greatest moments of my life.  But the moment I'm most looking forward to is when we're lying on the beach in Fiji, or standing on a glacier in New Zealand, and Chad suddenly freezes, freaking out about who Robby Herman will start for his fantasy team that weekend.  And I'll take further delight in watching him, paralyzed with confusion by the time zones, struggling to figure what day and time it is in the U.S., and if it's too late to make that Wednesday morning trade.

"I can't wait for next football season."


Indianapolis (-5) vs. New Orleans (Sun. 6:25 ET).  All I wanted was a split last week, so I could have a shot at a winning record.  But like Tony Romo and Jessica Simpson, it wasn't meant to be.