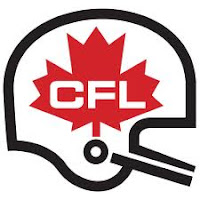 It's not much of a secret that American sports have a July/August problem. They get away with it because the weather's great, and most of us are out of the house anyway. But still, if an alternative was out there -- say, a legitimate, entertaining football league that started in late June -- we'd all be a lot happier.

Little did I know, it already exists.

You just have to think north of the border.

This week my job took me to Vancouver, and Vancouver took me to a magical place I had heard about, but never really experienced: The land of the CFL. Don't laugh. By being a reader of my blog, I assume you consider me a legit football fan, and I'm telling you, the CFL is a real-deal July/August band-aid until NFL and college football start. Here's why: 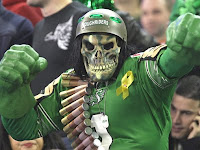 1) Passion and Tradition. According to a recent Sporting News article, Canadians are more passionate about hockey than ANY country is about ANY sport. That means potential. Hockey can't be year-round, and in the summer, something has to fill the void. Everywhere you go, sports bars are packed, and stadiums are filled. And don't mistake the CFL for an XFL-type fad. They've been around since 1958. Many of their teams pre-date ours.

2) Quality of Play. You don't need to take my word for it, just use your memory. Remember All-American wideout Adarius Bowman from Oklahoma State? Jarious Jackson from Notre Dame? They play here. And when you watch Cam Wake rack up 12+ sacks this fall, remember that before he was a Dolphin, he was a B.C. Lion.

3) Awesome Team Names. Some of the Lions' opponents this year include The Winnipeg Blue Bombers, Edmonton Eskimos, Saskatchewan Rough Riders. Aren't those great? Would ANY team name not sound awesome after "Saskatchewan"?

4) You Can Watch It. The NFL Network carries CFL now. But if you're like me (and the rest of the world) and can't get the NFL Network, you can still watch every game for free on your laptop with www.atdhe.net (which also lets you watch ANY live sporting event, for that matter -- a prospect so mind-blowing I still haven't wrapped my head around it).

5) You Can Bet on It. I don't need to waste time explaining why (budgeted and within reason) betting changes everything. In fact, had I lost on the Rough Riders my first night instead of winning, it's quite possible I would've never written this column.

6) Innovative Rules. Bigger fields with more players (wide-open action), three downs instead of four (more risk-taking), up to five players in motion before the snap (more offensive possiblities), points for drilling punts through the uprights (more scoring), and my personal fave: every roster must have at least 12 Canadians (more Canadians).

7) More Fights. Fights come with the territory here in hockey country, and there's nothing the league could (or would) do about it. I wouldn't want this for the NFL, but it's pretty darn entertaining nonetheless.

So when you're sitting on the couch on another sweltering July/August evening, sulking because your favorite baseball team sucks, blame your team for sucking. Blame baseball for being miserable. Blame the NFL for not starting sooner. Heck, blame yourself for not searching harder for a solution.