The Revenge of Brian Allen

Of all the soccer games I’ve ever been to (not many), the most memorable by far was one of my brother’s third-grade rec games, when his best friend Brian was being persistently harassed by a bully on the other team. This bully pushed Brian around any chance he got, and it was driving him nuts. He kept complaining to the refs, but they refused to do anything about it. Finally, Brian spontaneously combusted. He gave himself a 30-foot head start, sprinted toward the (much) larger bully as fast as he could, and barreled into him with all his might.

And bounced off of him, onto the grass.
Now Brian was really steaming. Everyone was staring at him, and he didn’t know how to react. So he did the unthinkable. He grabbed his ball (and his dad was the coach, so it actually was his ball) and ran home -- past the field, through the trees, down a road behind the school -- crying and yelling third-grade-level obscenities the entire time.
It was the single-greatest temper tantrum I’ve ever witnessed.
And the best part? Once everyone had recovered from their unadulterated shock over what just happened, they realized the ball Brian ran off with was the only ball on the field!  Not until Brian’s mom got in her car, drove around searching for him, and finally found him a half-mile down the road could anyone play again. Until then, everyone just stood around, not sure what to do next. Whether young Brian had realized it or not, he had exacted the ultimate revenge not just on the referees, not just on the bully who’d been fouling him, but on the entire game and everyone associated with it. 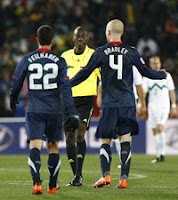 Which brings us to this morning, and yet another goal taken from the U.S. soccer team by the 100%-worthless FIFA referees. Sure, bad calls are part of the game. And the U.S. can and will continue to fight back. The way we came through in extra time today to advance was too good for words. Americans take pride in overcoming adversity, and this morning, we did it in a big freaking way. Our players have handled themselves with class, and in my opinion, have been an absolute treat to watch this entire tournament.
But in order to the win the ultimate prize – for U.S. Soccer to really “arrive” on the global stage – we have more games to win. And I just fear the powers that be won’t let it happen. I wrote an entire post a few weeks ago about the various ways this sport isn't fair, but I wasn’t even factoring in officiating biases against certain teams. We’re playing 11-on-15 out there, game after game. Eventually -- and I hope I'm wrong -- it’s too much for even our guys to overcome.
And if and when that happens – if we get screwed again on the world’s biggest stage – I think it’s time for us to adopt the Brian Allen strategy. It’s time for us to pick up our ball and go home. Enough is enough. If you don’t want us to be good at this sport, FIFA, then fine. We’ve got other ones. We’ll be fine. You can have your “beautiful” game.
But good luck finding another ball.
Posted by Matt at 1:57 PM