To Bike or Not to Bike?

A few weeks ago, when Lindsey told me her roommate Maria was getting a bike, I instinctively grabbed my phone to text her something obnoxious. I've never been a fan of bikers.

But I’m also trying to be more open-minded lately. And in two months, I'll be moving to Stuyvesant Town: A nightmare crosstown-bus commute from my office. Was it time to stop being stubborn and give it a shot? To become what I've despised? Let's consider the pros and cons, shall we?
PRO: It’s efficient. 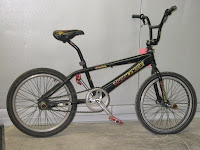 Maria recently started at the same agency as me.  She says her commute by bike is twenty minutes. From their house it takes me almost forty. That’s a difference of an inning of the Mets, half a quarter of Monday Night Football, and perhaps even getting home in time to see what breathtakingly ugly suit Walt Frazier wore to the Knicks’ game.
CON: It’s inefficient.
This goes with why I don’t like driving: You can’t accomplish anything while you do it.  You can't read, write, text, talk on the phone, etc. It’s pure wasted time. (For the record, I don’t count listening to music as accomplishing something. And even if you do, I don't recommended biking through NYC without the ability to hear an oncoming hybrid cab.)
PRO: It’s good exercise.
CON: It’s really not.
As Britney Spears once said, ‘Sometimes I run’.  And sometimes I bike. The former is hard. The latter isn’t.  That is, unless you’re doing hills, which 1) suck and 2) aren't in Manhattan.


PRO: It’s cute, like a little pet.
Maria’s bike is adorable: It's a 1993 BMX Mongoose that's way too small and has pegs for doing tricks. She said that in just one ride downtown, she got hollered at three different times by potential suitors. If you get the right bike, you will attract interest. There’s no doubt about it. It’s a steel-framed French Bulldog puppy.
CON: It’s a pain in the ass, like a little pet.
While you’re looking for a place to keep your bike, I'm either taking your place in line, drinking the last of the milk, or getting the better seat for the game. And, unlike a pet, your bike can’t love you back.


PRO: It saves money.
A 30-Day Unlimited subway pass is $89 and getting higher by the month. Biking continues to be free.
*CON: It costs money.
I was gonna write that bikes are expensive, but I checked online, and they’re really not. You can get one for 1-2 months worth of subway passes (then tack on another month's worth for a helmet and bike lock). Three months of biking makes your money back, then it's all savings from there.** Hence the asterisk. 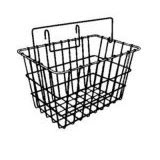 **The asterisk to the asterisk represents the impulse buy you'll inevitably make after getting overexcited about your new means of transportation. For Maria, it was this $45 portable bike basket.
PRO: It’s kinda fun.
In the right scenario (good scenery, no hills, a nice breeze, someone to bike with, a silly-sounding bell), biking is an enjoyable alternative to walking/running.
CON: It’s kinda hard.
I have legitimate trouble 1) stopping, 2) starting, 3) switching gears, and 4) taking my hand off the handlebars without veering into traffic. Perhaps this is all what my roommate Ramsey would call a “you problem”, but still, you have to admit…
CON: It’s legitimately dangerous.
Civilian NYC drivers are in a permanent state of road rage. Cab drivers navigate the streets like they’re playing Grand Theft Auto. Pedestrians refuse to walk where (and when) they’re supposed to. All of them are doing something on their cellphones. Even if you are obeying the laws of traffic (which would make you the first biker I’ve met to ever do so), you’re still a two-wheeled accident waiting to happen.
PRO: Mayor Bloomberg and environmentally-responsible people everywhere will love you.
When people pick up a newspaper and see a picture of you riding in the bike lane on 23rd street, they’ll think, “Wow, now that city's doing it right.  I’m proud of that person.”
CON: Everyone else will hate you.
When people in real life see you riding in the bike lane on 23rd street (or more likely, going the wrong way down a one-way street, running a red light because it 'looks clear', or -- my personal favorite -- weaving your way through the sidewalks)....well, you don't want to know what they're thinking.

THE VERDICT: It was definitely closer than I thought, but for now, FVG will continue to remain bike-less.