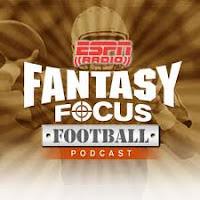 In my never-ending quest to be perfectly efficient, I finally -- two to three years late -- embraced podcasts. I typically resist new technologies as long as I can and hope they go away, until I realize they're here to stay and worth the hassle of learning how to use them. But podcasts made too much sense to continue ignoring. I have 15 minutes of walking each way for my commute, and other than somewhere between three and six burned calories, not much to show for it. If you're telling me I can use that commuting/walking time to listen to a half-hour of Fantasy Football Focus, I just need to know where to sign.

The problem was, I had no idea how to get set up. I had no iPod (yes, I have no iPod), so Lindsey gave me her old one (no, I'll never download a song to it). Then I had to "sync" it to iTunes (which actually wasn't too difficult), and then went to the iTunes store to fill it with content.

This last part was more fun than I'd ever imagined. Pretty much every podcast is free, and you can "subscribe" to them -- meaning they automatically download to your iTunes every time a new one comes out. And there's a podcast for everything! Not only did I get ESPN Fantasy Focus, I got Dolphins OnDemand and Dolphins 'Finsider, too. And while I was at it, I got some newscasts and favorite political shows, which could potentially replace newspapers and magazines for me if all goes well. Who knows, I may never read again!

There's a good chance you're reading this and saying, "No sh*t, FVG. Podcasts are awesome. Welcome to the 21st century." And you're right. But in case you're a fellow boyfriend with limited fantasy research time (and a very late adopter like I am), allow me to suggest podcasts as an efficient way to consume that much more football content without having your girlfriend kill you.

At least, until she realizes you forgot how to read.

Houston (-3) vs. Dallas (Sun, 1:00 ET). And by the same token, what has Dallas done to make people think they can hang with what's become one of the top five teams in the league?