It's Not About Me

The Oklahoma City Thunder made it to the Western Conference Finals last night. My buddy Mike, who roots for the Mavs (the Thunder’s next opponent), immediately texted me and said “Guess we’re enemies for the next two weeks”, implying that I’m such a big Thunder fan now that things will get metaphorically ugly between us.
“I guess,” I responded.
I get so torn when I talk about the Thunder. They’re my second-favorite team, by far. And with a sports-obsessed fan like me, a second-favorite team often eclipses the passion of a lesser fan’s first favorite.
But, a true sports fan can’t have a second-favorite team. I spent my first two years of friendship with Ramsey convincing him he couldn’t root for both the Bears and Giants. All of us did. And he relented! How can I be such a hypocrite? The Thunder aren’t my team, they’re Lindsey’s team, and she can’t even watch a full game without shopping on Piperlime.
But, as Linds is fond of saying when I come down with the common writer's malady of self-centeredness, “This isn’t about you”. And in this case, she’s right: It’s OK to love OKC for reasons having nothing to do with my newfound ties to Oklahoma.
It’s OK to love OKC players because the players love each other. They’re the anti-Heat, taking their talents to Mickey Mantle’s in Bricktown after each game to hang out with and embrace the fans. And it’s OK to love OKC for those fans, who endured quite a tragedy of their own six years before 9/11 ever happened, and voted over and over and over again to pay extra taxes toward the creation of a new stadium, believing that one day a professional team would come along and give the city something to rally around. I’m not making this up. Check out the video here. 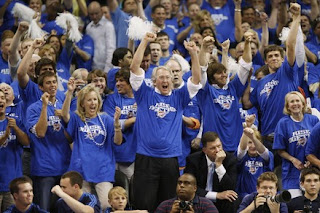 In yesterday’s Game 7, the fans wore “Rise Together” shirts (and by the end of the game, Kevin Durant had one on, too), because that’s what they all did: They went from total devastation to a brand new team losing 29 of its first 32 games to the Western Conference Finals. When a team and a town are one, it’s amazing to see what they can accomplish. It’s OK to love OKC because what they’ve achieved is bigger than basketball.
And it’s certainly bigger than me.
Posted by Matt at 11:47 AM