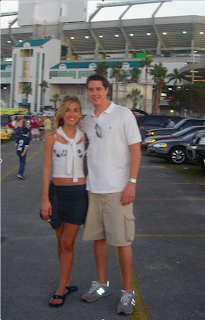 A little over a year ago, I was at my desk blabbing on and on about how excited I was for the game tomorrow night, when my co-worker Alexis walked in from the office next door.

"What game is tomorrow night?" she asked.
"USC - Ohio State."
"And it's a really big game?"
"Biggest of the year so far, why?"
"Bill and I were supposed to go out to dinner tomorrow night, but then out of nowhere he called and said he wanted to cook for me instead." She smirked. "Now I know why."

Then, instead of telling Bill she was onto his plan, she played along. She said she appreciated his suggestion, but that she really wanted to go out to eat -- purely to mess with his head -- until he finally came clean about the game.

Tomorrow, Alexis and Bill are getting married. And with them both being Penn State alums, they planned an evening wedding around a Penn State-Iowa game that was supposed to be at 3:30. Well, it got moved to 8:00, and Alexis has pledged to cut the hotel cable wires if anyone (especially Bill) is caught sneaking off. She's already got the scissors.

So, wherever you are this weekend, raise a glass to Alexis and Bill. If there's a better Football vs. Girlfriend couple out there, I'd sure like to meet 'em.

Cincinnati (-16.5) vs. Fresno St. (12:00 ET). Not as nervous about this one. I love betting against West Coast teams playing early East Coast games. And Fresno's defense is awful.

Miami (-3) @ Virginia Tech (3:30 ET). "The U" has a couple injuries, but they look like they're on a mission this year. And Tech continues to look overrated.

Texas Tech (0) @ Houston (9:00 ET). This one should be a shootout, but I see Texas Tech as the last one standing. They held their own against Texas last week. I guess Robby wasn't the good luck charm I thought he was...