One of Lindsey's favorite shows these days is Keeping Up With the Kardashians, on the E! network.  Normally I hate this show, EXCEPT when Khloe Kardashian's husband -- a.k.a Lakers' forward Lamar Odom -- makes an appearance.  Then I'm interested. 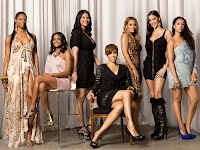 So when I saw an ad for Basketball Wives, a new reality show on Vh1, I dared to dream that the network had struck FVG gold.  Real Housewives meets NBA Basketball?  Kardashians with permanent Lamar Odom cameos? Could this finally be the show BOTH of us DVR?

The brainchild, executive producer, and star of the show is Shaunie O'Neal, fresh off her highly publicized divorce from Shaquille O'Neal, a player who needs no introduction, and isn't given one: We never see him. Shaunie flies to Miami to meet up with her friends and fellow cast members, whom we're introduced to one by one.

If you think you read that wrong, you didn't. Not one of the "wives" is actually married to a current NBA basketball player. And one of them really is Dwight Howard's baby mama, and yes, she's the designated crazy one -- getting scolded in the premiere for inappropriate dancing with a stripper pole.

At the first commercial break, I asked Lindsey how Wives compared with her beloved Real Housewives.

"Are you kidding?  It doesn't compare. It's a lie. None of them are actually wives of a basketball player!"

I reminded her that Real Housewives at times was a misnomer, too, as some of the housewives had jobs, and others weren't actually married.

"Well whatever," she said. "The Real Housewives have personalities. These women sound like they're reading a script."

I agree. While all reality shows stretch the truth, this misrepresentation cut deeper. You can't base an entire show on a single premise and have it immediately prove to be false. It's like doing a reality show on midgets and having them all turn out to be tall (Wait, does that exist already?). Reality TV works best when it at least feels A LITTLE real, and then lets one or two TRULY crazy -- not reading-from-a-script crazy -- characters take over.

And besides, the show sucked.