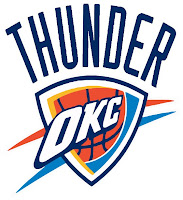 With a starting five averaging 23 years of age and zero games of playoff experience, it's unlikely the Oklahoma City Thunder will win, or even make it to this year's NBA Finals.  In fact, there's a pretty good chance they'll lose in the first-round.  But as far as Football vs. Girlfriend's concerned, that's irrelevant.  It's icing on the cake.

What makes OKC the obvious choice?  Let's consider the usual "Most Valuable" criteria...

Can you win without them?  I'll put it this way.  If Lindsey (a proud native Oklahoman) is over and the Thunder aren't playing, we're watching 'Kell on Earth'.  My record of getting to watch basketball with Linds on a night the Thunder aren't (isn't?) playing?  Somewhere in New Jersey Nets territory.

Are they consistent?  Any team can be exciting enough to convince Lindsey to watch for a night. There's a whole host of storylines I can fabricate.  But like a patchwork pitching staff, it won't get you through a season.  The Thunder, however, are a joy to watch night in and night out.  This team doesn't take nights off.  And therefore, neither do I.

Are they winners?  The New York Knicks are my favorite basketball team.  But for Knicks' fans, this season was over before it started.  There was NO WAY I could justify watching the Knicks to Lindsey.  I had enough trouble watching myself.  That's why the Thunder's remarkable turnaround in the wins column was so crucial.  Women lose patience with guys that don't work, clothes that don't match, and teams that don't win.  It's just the way it is.

Likability factor.  In 1947, Ted Williams lost the MVP race to Joe DiMaggio despite winning the league's Triple Crown.  Why?  A Boston Globe reporter left him off his ballot entirely, because he didn't like him.  Voters are human, and they have feelings too.  Fortunately, likability could be the Thunder's strongest suit of all. Take this quote from one of today's preeminent sportswriters, Bill Simmons:

"This is something like my 10th or 11th year with NBA Season Pass. I've never gotten attached to a non-Celtics team before, and I've never played favorites if there were multiple non-Boston games happening at the same time. This year? I find myself gravitating toward Thunder games night after night. It's a real team. They like one another. They're better as a group than they are as individuals. And (Kevin) Durant is the most special non-LeBron talent in basketball. Not only is there nobody like him, but there's also never been anyone like him..."

I sent this quote to Lindsey the other day.  I send her anything positive I read about the Thunder.

"Ooooo, so exciting!" she replied.

Sounds like a girl ready to watch every playoff game!
Posted by Matt at 10:29 AM