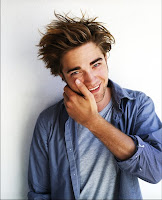 On Friday Night, Twilight: The New Moon, starring Robert Pattinson, opens in theaters nationwide. Six gazillion teenage girls will go see it. Most will shriek the entire time. If your girlfriend's under the age of 50, she's probably heard of him. If she's under the age of 25, she's probably in love with him.
And if she's under the age of 90, she can probably beat him in basketball.
Pattinson was on my street a few months ago, filming a scene for an upcoming movie with Emilie de Ravin (from Lost). It's a carnival scene, and he was with de Ravin at the basketball shoot, perhaps trying to win her a stuffed animal. And when the movie opens next year, if any of his shots go in, it'll be thanks to some Oscar-worthy editing.

Because in real life, he wasn't even close.
I know, I know. It's a movie. It's not like he's trying. Well it doesn't matter. It was embarrassing. One of his shots hit the top of the carnival booth. He kept bouncing the ball off his foot. He dropped a three-foot, underhand pass from a production assistant. Three feet!
And he didn't care at all! Nobody did. All anyone could talk about was how hot and dreamy he was.
Hello?? Am I the only one seeing this? He just hit the top of the carnival booth!!!