Don't Be a Part of Your Girlfriend's Costume 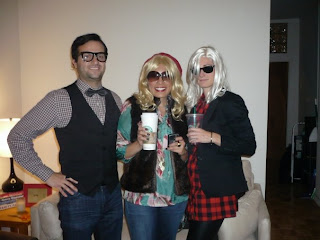 In an earlier post, I talked about how my favorite Bravo show of Lindsey's is The Rachel Zoe Project, which got a very respectable FVG grade of B-. So when Lindsey asked if I wanted to join her and Maria to be the show's three main characters for Halloween, I said, 'Sure. Great idea.'

But it wasn't a great idea. And not because that meant I'd be Brad, the gay intern, but because now I'd have to be NEAR her all night. And being near her most likely meant NOT being near a TV playing USC-Oregon or Texas-Oklahoma St.

If, at any point, I were to leave them to find the games, their costume would fall apart, and they couldn't take funny pictures to put on Facebook. And then I'd get yelled at. (Which, come to think of it, is what her character does to my character on the show anyway. So we'd really just be acting the part.)

Anyway, it didn't turn out as bad as I'd worried it would.

But it could have.

And next Halloween, that's not a risk you, or I, should be willing to take.

Ohio State (+5) @ Penn State (3:30 ET). My roommate Ramsey will be at this game with his girlfriend, another Penn State alum. So I'll root for the Lions to pull out a squeaker, because I think this line is too high.