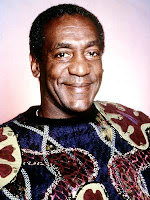 My favorite Cosby Show episode is the one where Rudy's the star running back of her pee-wee football team. Toward the end of the episode, Cliff's on the couch watching the Bears-Giants game, when Clair walks in and asks if she can watch, too. Cliff can't believe his ears. She's never wanted to watch football before in her life. He happily invites her to take a seat.

But before he can even get comfortable, daughter Denise joins them on the couch, and all the women can talk about is how cute the players' butts are, and how Walter Payton isn't as good as Rudy because "he keeps getting tackled". Ultimately, it's Cliff who ends up leaving the room.

It's a hilarious scene, but to dismiss it as comedy misses the brilliant insight. Because in real life, I don't think Cliff leaves the room. I think he's ecstatic, and doesn't care what the women next to him are saying. Because he's just stumbled upon the ultimate Football vs. Girlfriend scenario: Putting in quality time WHILE watching football, and having her be perfectly happy about it.

So, using this as a jumping-off point, let's explore some ways we can convince our girlfriends to want to watch football:

1) Find a heartthrob.
Devin's girlfriend Michelle has a weird obsession with Tom Brady. Chad's fiance Morgan thinks Mark Sanchez is 'hot stuff'. Do Chad or Devin care? Of course not! Their girlfriends are talking about football. See if you can get her to 'fall for' a player. Don't worry, they won't run away together. (But if they do, I apologize.)

3) Get your kid to start playing football.
Far and away, the best solution. When I started playing in 5th grade, my mom became a new woman. Now she'll watch any game, anytime, whether her sons are playing or not.
What if your kid's a girl? Well, Rudy Huxtable did it.

4) And if all else fails...
There's good old-fashioned bribery. Put a hundred dollars on Michigan, and tell her that if they win, you'll buy her a pair of shoes, and if they don't, you won't. Desperate? Absolutely.

But you'll never see a woman learn "Hail to the Victors" faster.
Posted by Matt at 6:07 PM